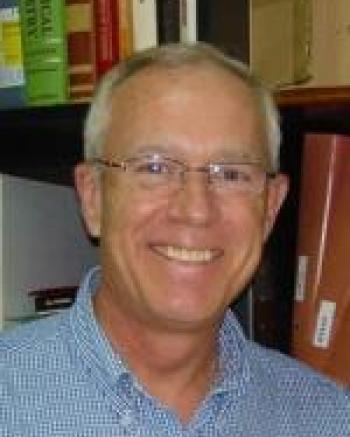 Position
The Rodermel lab is interested in defining the factors that regulate chloroplast biogenesis. During this process, photosynthetically-competent chloroplasts develop from undifferentiated proplastids in meristematic tissues, or from etioplasts following illumination of dark-grown seedlings. Variegation mutants are powerful systems to explore mechanisms of chloroplast biogenesis. The leaves of these mutants have green sectors with normal-appearing chloroplasts and white sectors with defective chloroplasts. Variegations can be produced by mutations in nuclear genes or in organelle genes (chloroplast or mitochondrial): whereas the white sectors are always associated with the mutant gene, the green sectors can have either a wild type or mutant genotype. We are interested in nuclear-gene-induced variegations in which the cells of the mutant have a uniform (mutant) genotype. This raises the question how the green cells compensate for the mutant defect. Our research has been guided by two questions:

1. What is the gene product defined by the variegation locus? Our goal here is to understand the function of the protein, how it is regulated, and what role it plays in photosynthesis and chloroplast biogenesis.

2. How do the green cells bypass the requirement for the defective gene product? This question provides insight into pathways and regulatory networks of chloroplast biogenesis in which the gene product is involved.

For a number of years we have focused on two variegations — the immutans and var2 mutants of Arabidopsis. The IMMUTANS gene product is localized in plastid membranes and is a versatile terminal oxidase (termed PTOX, for plastid terminal oxidase). It serves as a redox factor in carotenoid biosynthesis, chlororespiration, and oxidative stress avoidance. PTOX also participates in control of the redox poise of the plastoquinone pool, and can act as a photosynthetic safety valve during light stress conditions (e.g., light, cold). In this capacity, it shunts excess electrons from the PQ pool to oxygen, forming water. VAR2, on the other hand, is a subunit of the FtsH zinc metalloprotease complex on the thylakoid membrane. This complex plays a central role in protein quality control in plastids, and it mediates a number of membrane modeling events that occur during thylakoid membrane biogenesis. In chloroplasts, its most prominent role is in the PSII repair cycle, where it degrades photodamaged D1 proteins.
The Rodermel lab is interested in defining the regulatory mechanisms underlying PTOX and VAR2 function using immutans and var2 as tools. The principal method involves the generation and characterization of second-site genetic suppressors of these mutants. It is presumed that such suppressors define activities that bypass the need for PTOX and VAR2, since such suppressors give rise to all-green, photosynthetically-competent plants. To date, a number of var2 and immutans suppressor lines have been isolated, and over a dozen have been characterized at the molecular level. Many of these suppressors are components of the chloroplast translation apparatus (for var2 suppressors), or are novel thylakoid membrane proteins (for var2 and immutanssuppressors). Some of these suppressors replace the activity of VAR2 or PTOX during chloroplast biogenesis. For example, it has recently been demonstrated that an activation- tagged version of the mitochondrial protein AOX2 (alternative oxidase 2) is able to rescue the immutans phenotype, suggesting that this protein is dual-targeted to both organelles, and that it normally supplements PTOX activity during chloroplast biogenesis. In addition to suppressors that replace PTOX and VAR2 activity , others act in a more indirect manner to compensate for loss of PTOX or VAR2; mechanisms of suppression in these lines are a current topic of investigation.