A Telling of Operation: Obstacle Course

On September 19th 2015, a brisk morning heralding the approaching autumn, bold volunteers convened in Bessey Hall for Admiral Colbert’s mission briefing.  This would be the 48th deployment of the Skunk River Navy since its beginning in the fall of 1998.  A mixture of Biology students, peer mentors, laboratory TA’s, and SRN veterans sat at attention as Admiral Colbert outlined Navy policies and the itinerary. 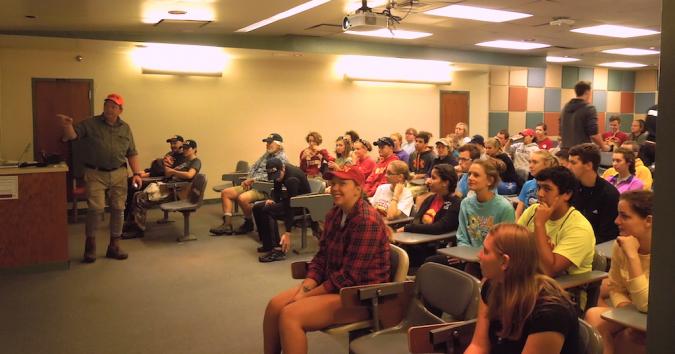 In most years, the Navy deploys with canoes that serve as trash barges.  Due to high water levels and flows in the area, this 48th Navy would have an alternative deployment - a Navy without canoes, and on a small tributary of the Skunk River called Worle Creek.  “Operation: Obstacle Course” is what Admiral Colbert dubbed the mission.  The true meaning of this would become apparent in the experience.

With the briefing completed, the SRN volunteer crew piled onto yellow school busses for deployment.  Our base camp was set up in a location familiar to many an Iowa Stater – the grassy lots east of Jack Trice Stadium.  One of the best ways to get to know biological organisms is to experience them in their natural environment.  The data collected from this mission would also be used in the IOWATER water monitoring program.  The types of organisms found are an indication of waterway quality, and tell us about the state of our streams in Iowa.

Admiral Colbert commanded the crew into two neat lines for mission assignment.  Six crews were created to use nets and trays to assay the biological state of the creek.  The target organisms were benthic macro-invertebrates, or boneless biological organisms that can be seen without a microscope.  Once in the creek, crews began scouring for samples. 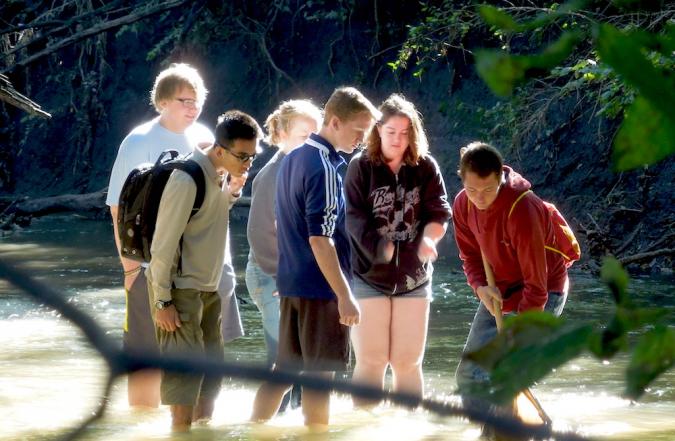 One of the best ways to get to know something is through first-hand experience.  This is one of the key components of the SRN service-learning project: to experience biological organisms in their natural environment.  While a relatively depauperate waterway, Worle Creek still had plenty of biology for volunteers to experience.  Water striders (family Gerridae) skated along the surface of the creek, using surface tension to stay aloft.  One group was able to collect a whirligig beetle (family Gyrinidae), whose gyrating swimming technique granted its namesake.  Other biological specimens required some literal scouring.  Clinging to the undersides of rocks were freshwater snail eggs, delicate, and difficult to collect.  Kudos to the patience and skill of the volunteer who managed to collect this sample without rupturing the sac: 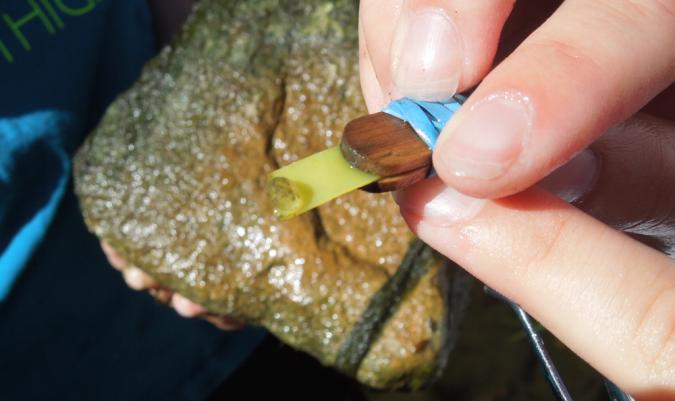 We were not on the look out for vertebrates, but a few graced our presence.  Admiral Colbert was able to secure this beautiful bullfrog (Rana catesbeiana): 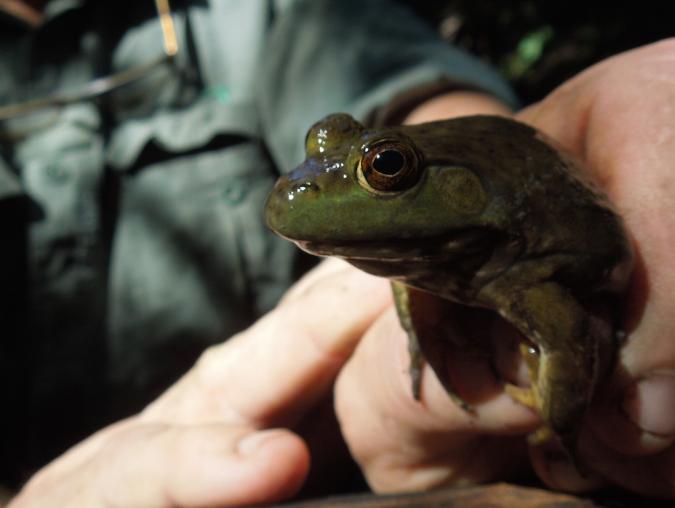 Given the noise our crews made during the biological survey, other wildlife with legs gave us a wide berth.  There were still signs of their presence, however.  One volunteer spotted raccoon (Proycon lotor) tracks along one of the creek banks, and another found these remains of a woodchuck (Marmota monax): 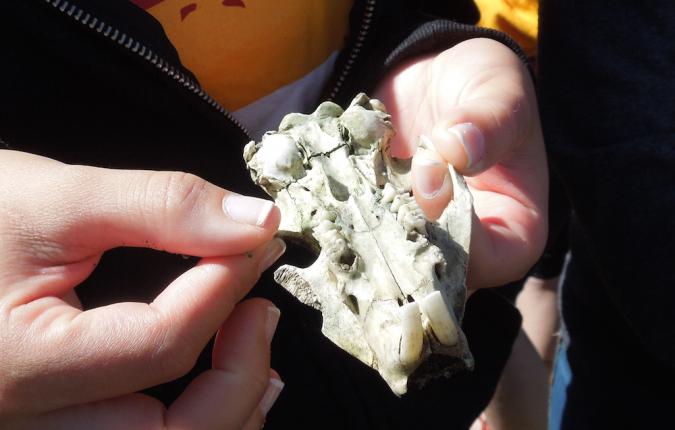 In the afternoon, the second component of the Skunk River Navy experience began: the service portion of service-learning.  We would patrol a section of Worle Creek looking for  garbage that did not belong there.  While we only deployed along a short section of Worle Creek, volunteers became immersed in the experience.  Some would ask where we were, as the surrounding banks and trees gave the illusion that we had left the Ames city limits and were out in the middle of the wilderness.  It also became rapidly apparent why Admiral Colbert had termed this operation “obstacle course.” 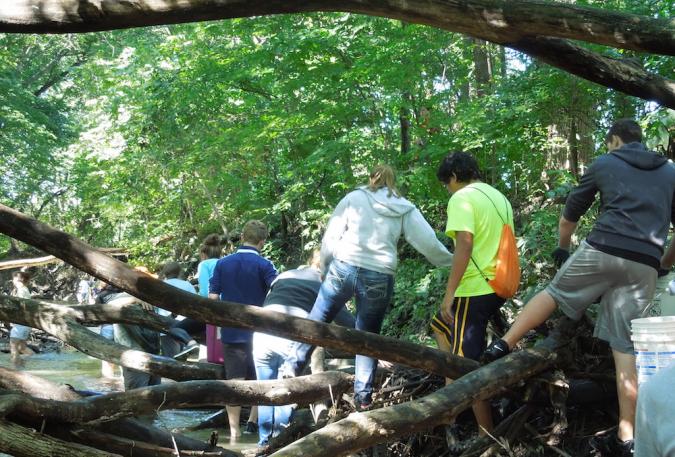 Traditional deployments occur in the larger waterways of the Skunk River, where such blockages of downed branches is infrequent.  It made navigation a challenge, but an opportunity for teamwork and testing one’s limits. 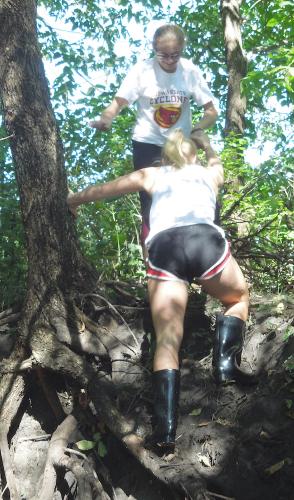 Between the muddy creek banks, invasive-choked underbrush, and drainage tunnels, Operation: Obstacle Course certainly earned its namesake!  One volunteer rightly remarked that we might better be called the Skunk River Navy Seals.

Not long into the fray, the crew encountered its first piece of trophy trash.  “Trophy trash” is a term used to describe (1) unusual or exotic items found during Navy deployments, or (2) items that volunteers choose to take home with them as a memento of their efforts.  This was a case of the first.  Behold, the Tub of Woe: 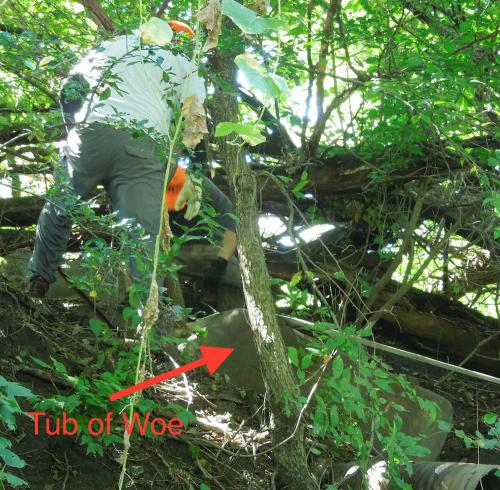 It is perhaps difficult to tell from the image what exactly this object is.  It is a cast iron bathtub, enameled, and once a common bathroom standard.  Why do we dub this the Tub of Woe?  Largely because our collective response to witnessing this was “woe is us!”  Such emotions are part of the experience of the Skunk River Navy.

Woe is us!  Why would someone dump something like this here?

Woe is us!  How on earth are we going to get this out of the creek?

It is one thing to hear about how profusely messy humans are, and it is something else to witness it.  Further, it is something entirely else to have to clean up after it with muscle, sweat, and force (plus the occasional explicative).  As it turns out, wrestling a partially-buried, cast-iron bathtub from a creek bank is far from easy.  A long tow rope was secured to it, and a mass of volunteers. 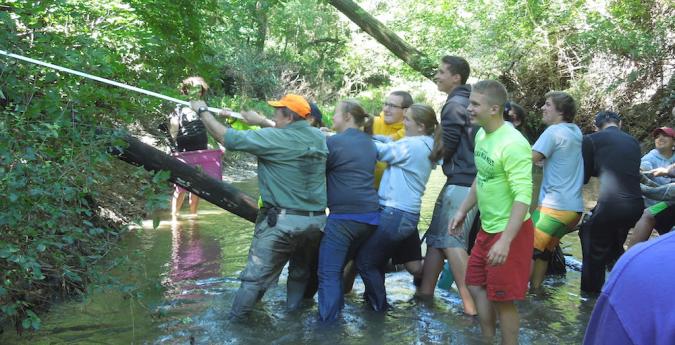 It took several attempts to extract this piece of rubbish from the bank.  One, then two failures.  Three, then four failures.  Five, then six failures.  The team persevered, and, at last, was able to wrench the Tub of Woe from its inappropriate resting place. 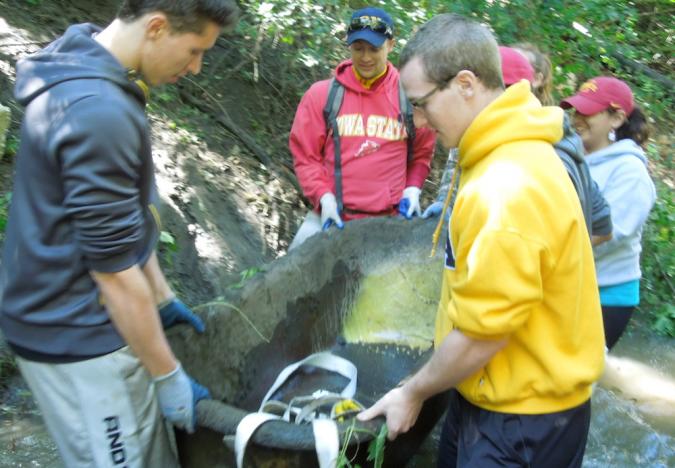 Nothing else was as exciting as the bathtub, but other large items recovered included around a dozen tires.  According to the DNR, Iowans generate 3 million waste tires each year.  They can’t be disposed of in a landfill, and because many sites that accept them charge a fee, illegal dumping of tires is unfortunately not uncommon.  That is likely why all these tires ended up in Worle Creek.

This is what our dumpster looked like at the end of the 48th Skunk River Navy deployment: 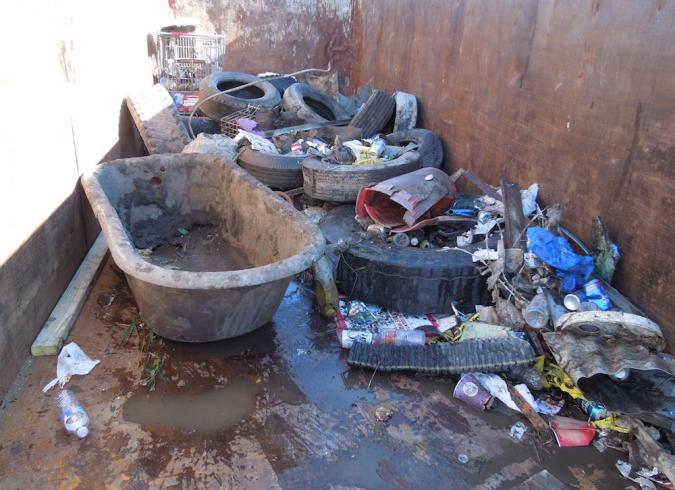 There have been times where the SRN has filled a dumpster this size.  It is sad that anyone sees it as appropriate to dispose of garbage out in nature like it was a waste bin.  It is also sad that we as a species produce so much garbage at all.  The experience that is the Skunk River Navy helps convey these lessons to its volunteers.

What is the Skunk River Navy?  It is an experience.  It is an experience of biology, of service, and of teamwork.  Through the shared challenges of Operation: Obstacle Course, the volunteers of the SRN bonded.  Together, we survived and conquered.  All new volunteers are now First Class Riverpersons of the SRN.  Congratulations, to all of you!  May the friendships we kindled and the lessons we learned persist in our hearts and minds.